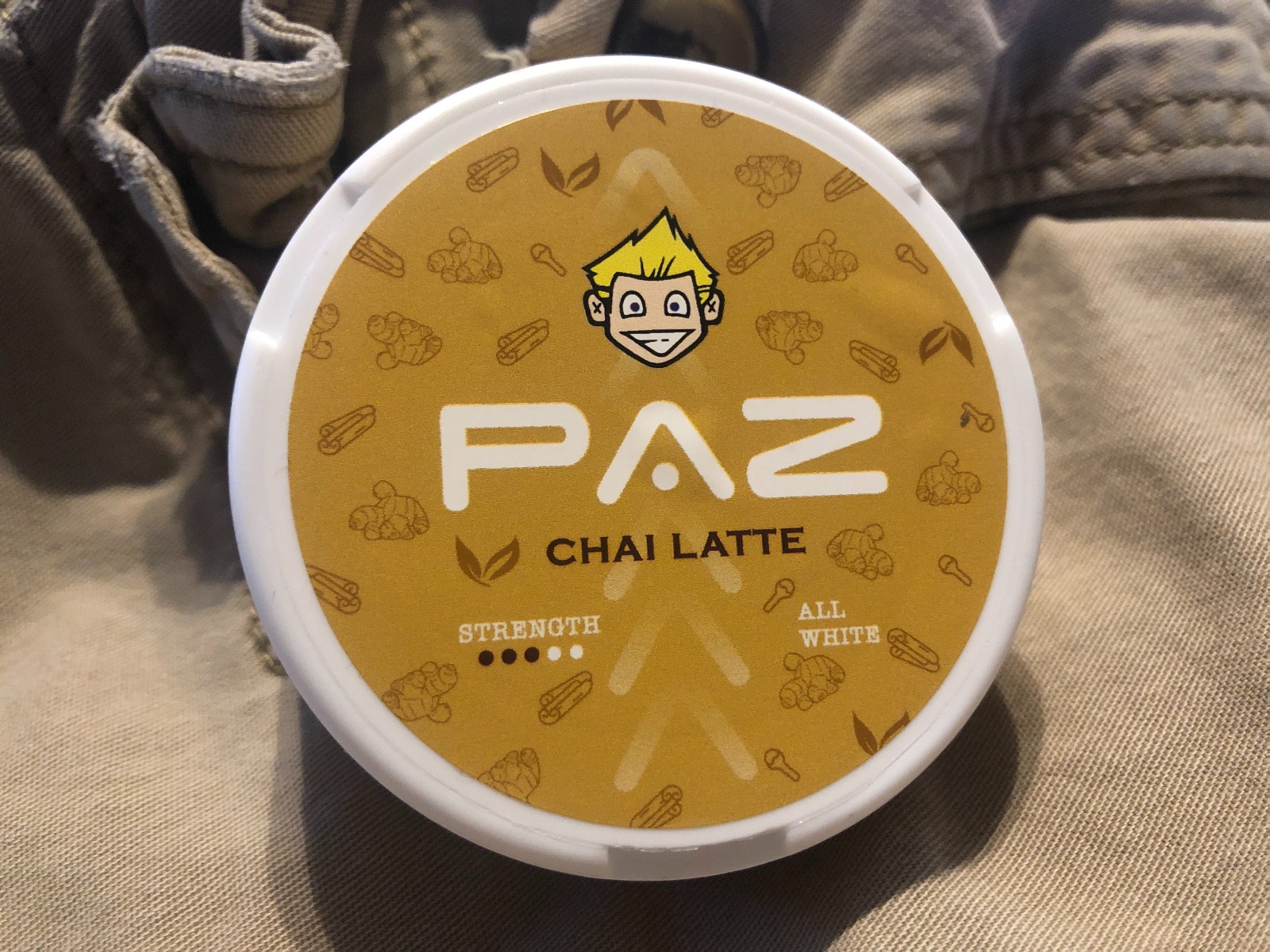 Over the past few years, I’ve made a lot of snus products with some interesting flavors: bacon, Brandy Alexander, bourbon and vanilla, and more.  The snus community genuinely enjoyed these products, but I was leaving out a portion of the community:  the nicotine pouch users.  Granted, I’m not a user of nicotine pouches.  I like my snus, and I stick to my snus.  However, nicotine pouches have only been growing in popularity over the past several years, and I figured that would be the next category I would check out in terms of making my next Snubie branded product. 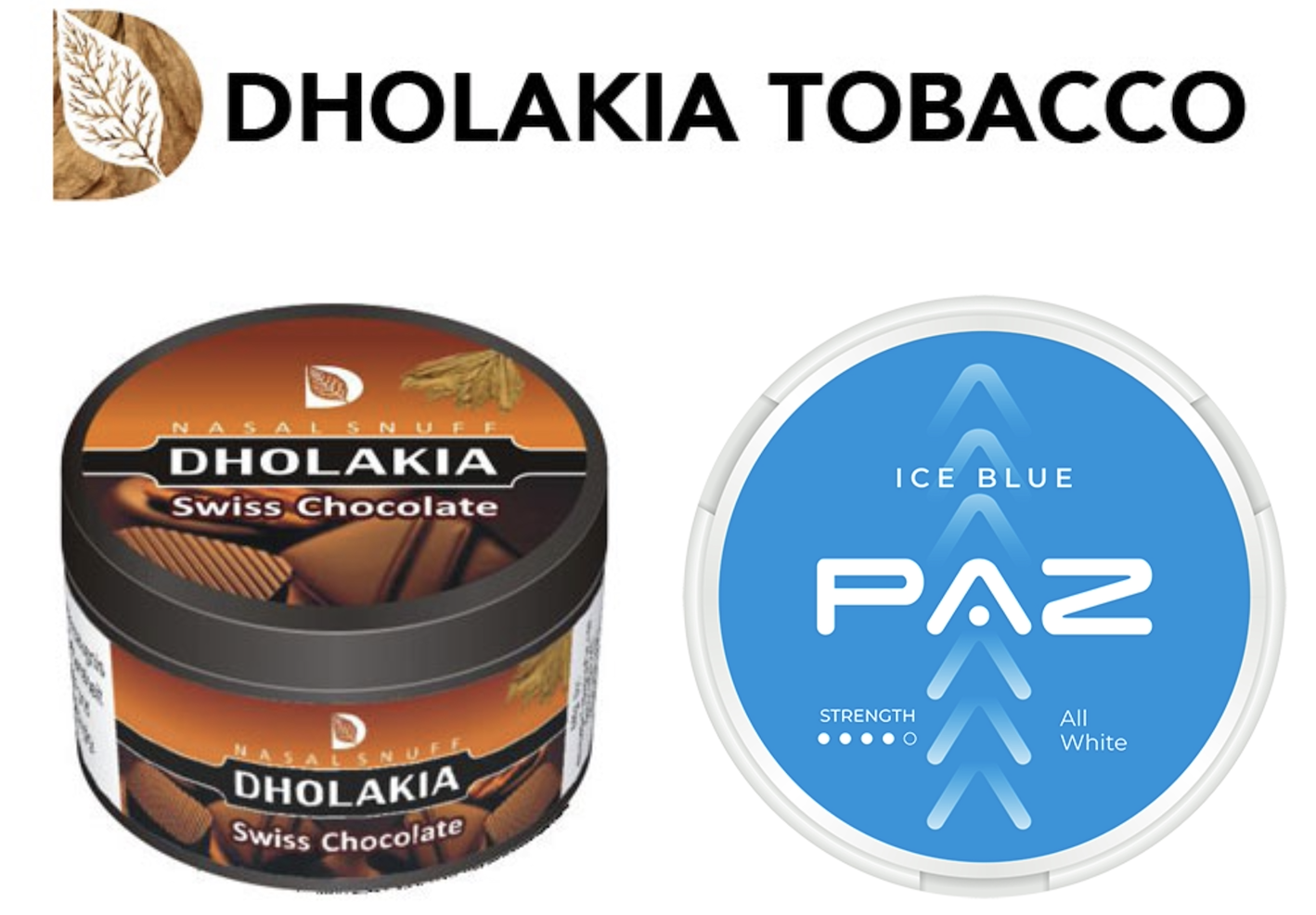 When I make products, I generally try to work with different companies.  I think it’s fun, and allows me the freedom to try different approaches with different teams.  This is my first release with Dholakia Tobacco in India.  I’ve been pretty familiar with them since the early days, as I am a big fan of their nasal snuff.  Their Swiss Chocolate snuff is a personal favorite of mine.  Within the past few years, they’ve started making next-gen products, including a line of nicotine pouches called Paz.  Their Paz series is pretty solid, so it got me to thinking:  what about a Swiss Chocolate flavored nicotine pouch?  I was exploring that idea, when they mentioned that they had been working on a Chai Latte flavor. 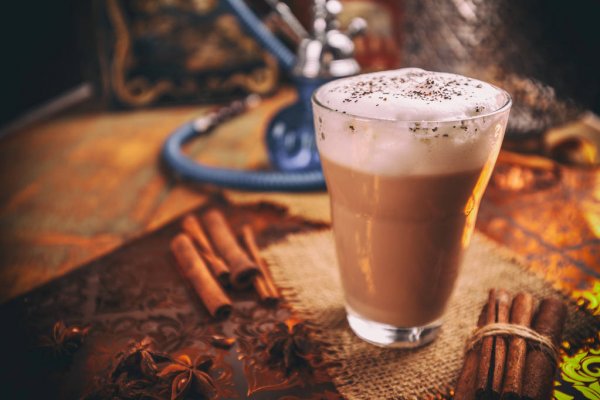 If you’ve never had one, a Chai Latte is an exquisite drink.  A chai latte is a twist on the traditional masala chai, a spiced drink popular in India.  It’s a personal favorite drink of mine, which excited me to be working with a company in India to create this product.  If you’re not familiar, it’s a drink made of black tea and various spices.  Usually, anise, cardamom, cinnamon, gloves, and ginger.  It’s quite tasty.  If you want to try one real quick, run down to your local coffee shop, grab one, and come back and finish this article.  Okay, finish this article, then go get one.  But I suggest using almond milk, it’s my favorite.

The flavor description I wrote for this one says, “Snubie Chai Latte has flavors of black tea, cinnamon, clove, and other Eastern spices, along with a creaminess from hints of vanilla”.  Each can weighs 12 grams and has 20 portions in it.  Paz usually weighs in at 0.5 gram portions, but I wanted them to be more full, so Dholakia was able to push them to 0.6 gram portions.  The nicotine strength is 12mg/g, or 1.2%.  That breaks down to 7.2mg/portion. 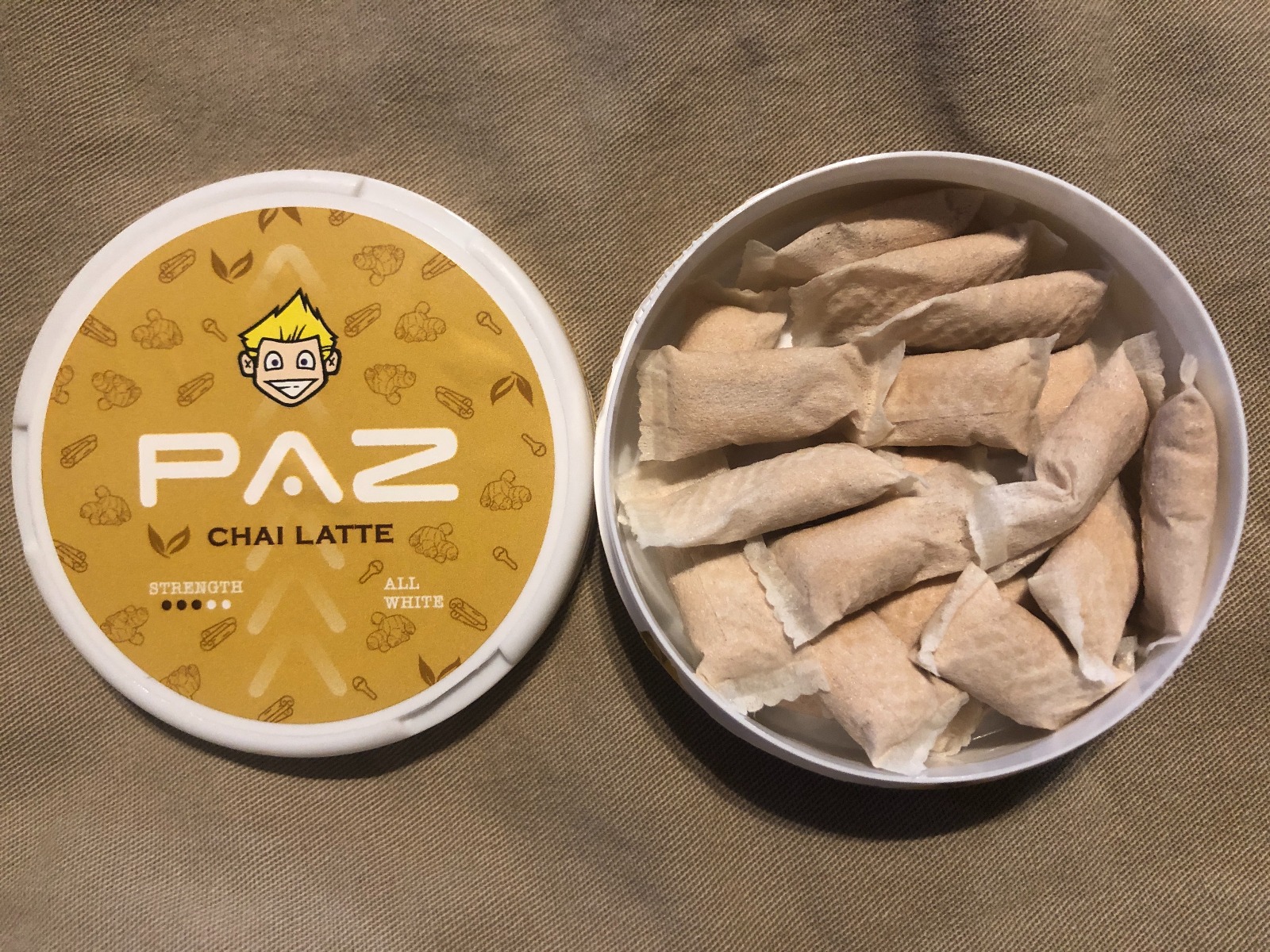 One thing I did when developing this one that I didn’t do with other products was involve a particular team of testers.  In the past, I usually developed the products as a reviewer.  This time, I’m still a reviewer, but I’m not a full time nicotine pouch consumer.  To develop a proper nicotine pouch, I wanted to involve people who actually use these.  Thankfully, a group of enthusiastic nicotine pouch lovers jumped on the chance, and helped refine my first batch into a much better tasting final product. 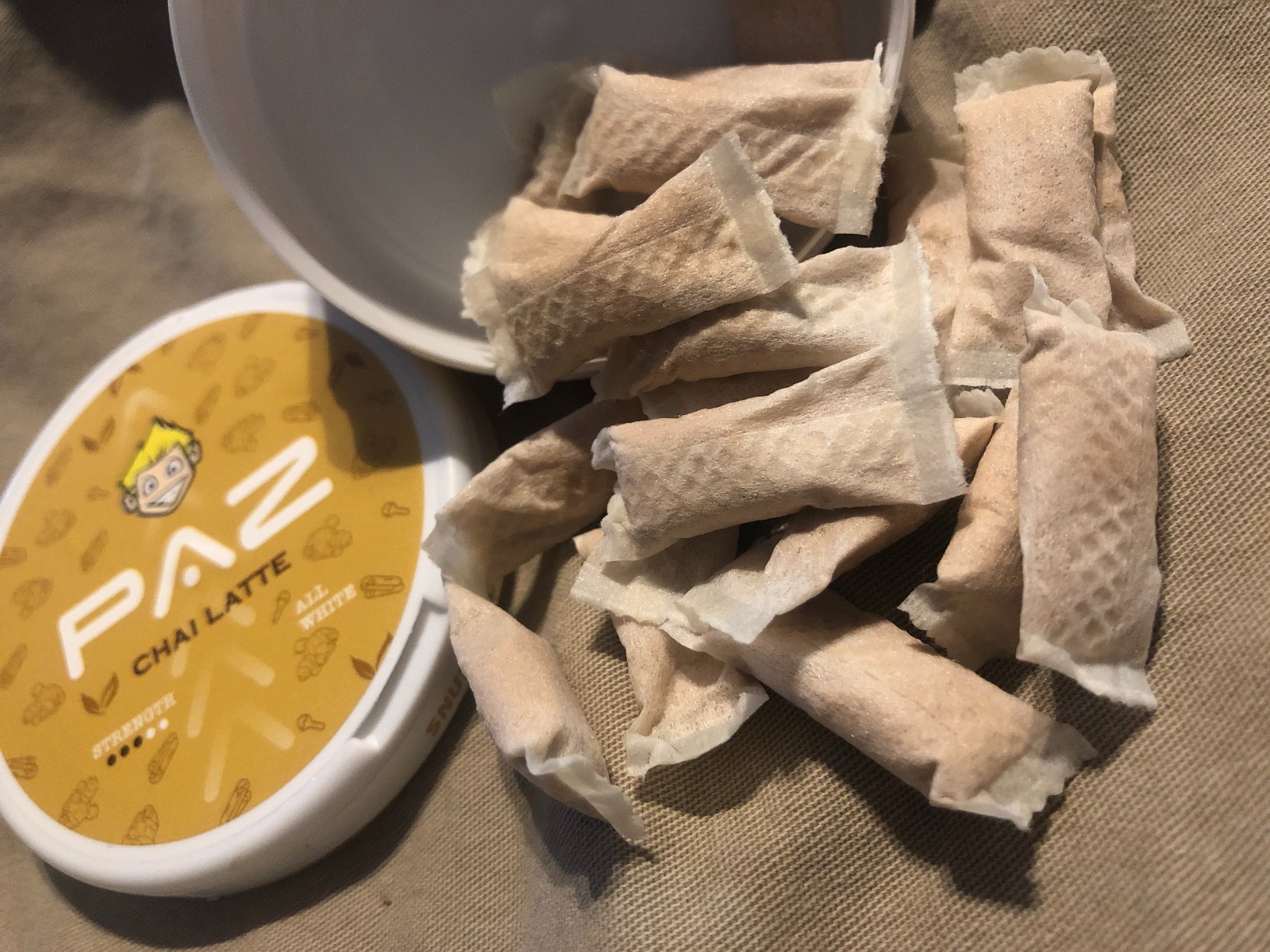 I always find it funny reviewing my own products.  When I first started writing about snus, I became good friends with Conny Andersson.  Many of you may know him as a tobacco guru who has developed some amazing products:  Kardus Snus, Islay Whisky Snus, Hope & Glory IPA Snus, and more.  When he launched new products, I’d always review them, and send him feedback.  Reviewing this product, it’s exciting for me because it shows me how far I’ve come.  From being someone who casually wrote about stuff, to being someone who has products on the market with my name on them.  It makes me feel accomplished.

When you open a can, the smell is unmistakably chai latte.  You’ll notice present sweet, but spicy tones of cinnamon.  There are hints of ginger and anise.  Wrapped around these components is a smooth, creamy character from the vanilla.

The portions themselves are smaller than the average slim portion.  Paz portions are usually smaller, but we were able to push these from 0.5g to 0.6g, so these are a little more substantial than the average Paz portions.  To the touch, they’re slim, with a moderate amount of moisture and softness.  They fit pretty well in the lip, and are pretty comfortable.

When it comes to the flavor, it is sublime.  I don’t say this as the guy who made it.  I say this as a snus guy who doesn’t use nicotine pouches.  This is a product I’d actually use, and I’m not a user of this type of product.  The flavor is smooth, and creamy in nature.  The first thing I pick up is a cinnamon character.  It’s spicy, and lightly sweet in nature.  The ginger comes in and mixes pretty well with it on the back end.  And then, I pick up tones of clove.  It’s a well balanced, creamy, smooth, sweet, and slightly spicy flavor profile.

In terms of nicotine strength, it feels to be around the regular strength mark.  The 12mg/g is the total, but at 7.2mg/portion, it’s actually closer, in feeling, to regular strength.  I personally am a regular strength fan, which is why I try to make products that are regular strength to strong.  I recognize that nowadays everything is all about how strong you can make a product.  But for me, ever since I first started reviewing snus, I’ve been all about flavor.  Flavor over nicotine, I’ve always said.  And this one has a regular strength that helps the focus remain on the flavor. 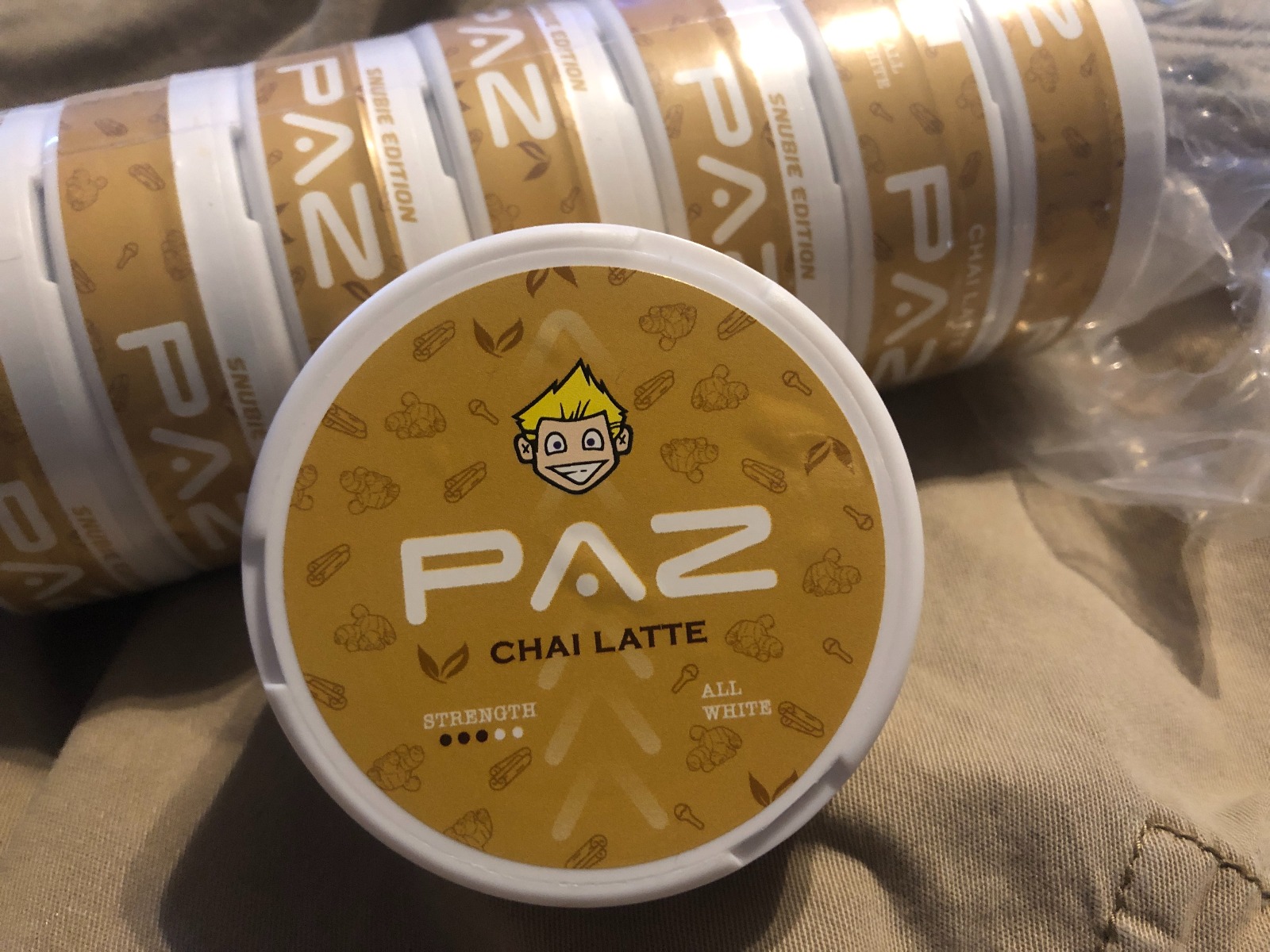 In the end, I was pretty impressed with it.  I know, I know, it’s my product.  But I’ll admit if one I make isn’t for me.  The Snubie Bourbon Vanilla Snus wasn’t a favorite, and it wasn’t one I ended up using, but I made it because people asked for it.  This one is probably the first nicotine pouch I’ll keep around.  The flavor is quite unique, and enjoyable.  It’s a good first thing in the morning product, or a good one at the end of the day.  Heck, you can even use it for a dessert snus.  At the end of the day, I’m proud of how it turned out, and I hope people will enjoy it!